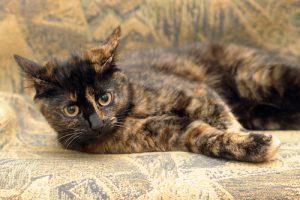 One summer night several years ago, we heard a loud, high-pitched wailing in our back yard.  My daughter tracked it down and found the tiniest kitten we had ever seen.  She had shiny black eyes and her coat was almost completely black, with just a sprinkling of light brown markings.  She was a newborn abandoned by her mother, and she was very hungry and all alone.

Cassie was so tiny that at first we fed her formula with a glass medicine dropper from the drugstore every few hours.   As she grew, she moved on to drinking formula from small plastic formula bottles from the pet store.  As she got bigger, she would hold the bottles between her little paws and throw them to the floor  after she emptied them.

Cassie was a character.  She loved to play and loved to have the undivided attention of her humans.  As she grew to her adult weight of four and a half pounds, she also developed a beautiful tortoiseshell coat…and tortietude.  She was a spunky little bundle of joy.

Often, when I was sitting at my desk doing homework,  she would jump from my bed to the desk and walk across my keyboard or sit and swat at the cursor while I was typing.  If I was so absorbed in my work that I was unintentionally ignoring her, she would sometimes  jump from my bed to the  back of my chair and grab onto my scalp with her little kitty claws.  There was no ignoring that.

When she was still very young, Cassie started to have problems with diarrhea.  The vet tried a few different medications, and the diarrhea would go into remission  for a time. When Cassie tested positive for feline leukemia, we were heartbroken.  We worked hard to keep her as healthy and as comfortable as possible, but eventually the disease was too much for her little body to bear.

As Cassie lay on the cushion at the vet’s office, I stroked her and she purred.  As the vet administered the medication to relieve her of her pain, I reassured her, telling her over and over, ” It’s OK, Cass.  It’s OK, Cass,” until Cassie stopped purring.

Loving and caring for Cassie was a blessing.  She rests under a majestic maple tree in the back yard.  We will always miss her and remember her endless love, her engaging personality, and her ferocious will to live.